8 weeks of meditation is enough to change your brain!

“Although the practice of meditation is associated with a sense of peacefulness and physical relaxation, practitioners have long claimed that meditation also provides cognitive and psychological benefits that persist throughout the day.“- This is in a press release regarding the research of psychiatrists from the Massachusetts General Hospital in the USA.

The study is unique, because it is the first which proved that meditation results in changes of the brain’s grey matter, and this can be measured. This study demonstrates that changes in brain structure may underlie some of these reported improvements and that people are not just feeling better because they are spending time relaxing. 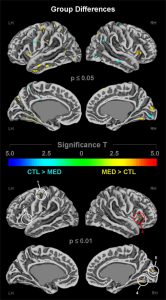 The study can be found in the January 30, 2011 issue of of the journal “Psychiatry Research: Neuroimaging“. Meditation changed several brain regions.In the study by the psychiatrists of the Massachusetts General Hospital, 16 volunteers took part in meditation training. MRI images were made of their brain structure about two weeks before the start of a meditation, and after the eight-week meditation training which was stress releasing and strengthened awareness.

The participants had one weekly group meditation, and they were given a variety of audio material for meditation at home. As a control, the researchers in the same time period made MRI recordings of 17 non-meditating people.

The meditation group, which reported a marked change in their lives after eight weeks, meditated 27 minutes a day on average. The changes were confirmed by MRI recordings – on the hippoccampus (which is crucial for learning and memory, compassion and self-awareness) the density of grey matter showed an increase.

The participants consistently reported that stress was reduced in their lives. This was associated with the decrease in density of the grey matter of the amygdala, which is a brain area responsible for stress and anger.

The study highlights the extraordinary plasticity of the brain, and highlights that meditation not only affects our well-being and quality of life, but can also affect our brain structure.